Our side garden, after three years

I was alerted on Facebook, recently, that it was three years since we had converted our side yard into what, in the UK, we call a garden - although in the US it would still be called a yard, albeit with some plants.

Our friend Jacob and his colleague Mike did the hard work, and built these rather nice custom-designed planters. We then bought a few suitable-looking plants from various places. 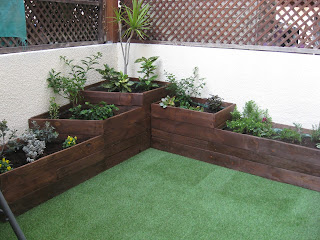 Plants here are mostly not labelled in shops, and we don't know much about them anyway. So it was all a bit of guesswork Unsurprisingly, some of the plants didn't last more than a few months, and some died off during the following summer. But others grew.... and grew.  So now it looks like this: 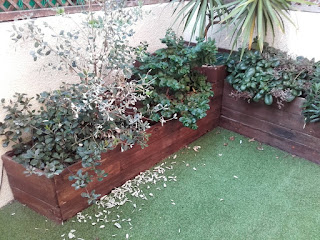 There's even an autumnal look with fallen leaves; I hope it doesn't mean that another plant is about to die. It's not as pretty as the original, but considerably more mature-looking, and easier to maintain. I have been watering them three times a week since the start of May, when the rain stopped, although it will be down to twice a week now, with slightly cooler temperatures arriving - and of course if it has rained within a few days, I won't water at all.

Here's another view of the current planters: 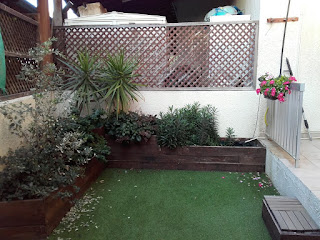 I didn't add any new ones this autumn, as the established ones seem to push any new ones out of the way. But we did buy a few bedding plants, as we usually do at this time of year. They don't usually last beyond about June, but that pink busy lizzie that can be seen on the right seemed to thrive, right through the extreme heat of the past months. So I bought a few more busy lizzies to put in the planters on that balcony railing: 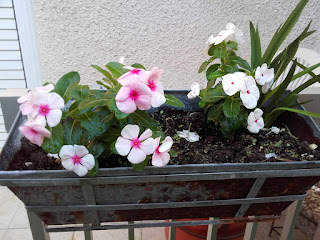 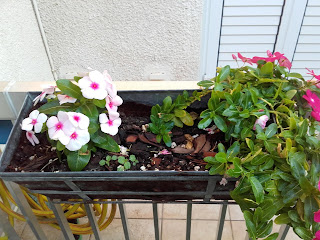 It remains to be seen whether they, too, survive a hot summer. And, indeed, whether they survive the winter.  Instructions for their care in books and online state that the ideal temperature is between 20 and 24 degrees Celcius.  Which is fine if they're indoor plants, in a house that is heated in the winter and doesn't get beyond about 25C in the summer.  Not so fine here, where summer temperatures reach at least the mid-30s regularly during the daytime (more in the sun), and winter nights can drop down below 5C.
Posted by Sue at 15:13