Signs of new life along the Salt Lake trail

With over six months' worth of drought, from the end of April until the middle of November, the scrubland along the Salt Lake trail was looking very dry. Some plants survive the summer - they have done so, probably, for centuries, acclimatised to the heat, gaining their moisture from the air, or from deep in the ground. But the ground was brown and bare.

Two weeks later, after two major rainstorms, there are signs of new life alongside the trail. 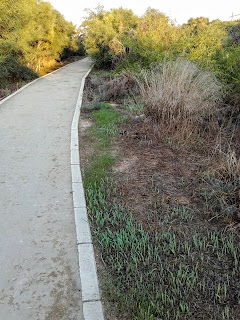 This is something I still intuitively associate with spring, despite twenty-three years living in Cyprus. We did, after about ten years, learn to buy bedding plants at the start of November, rather than April or May. Petunias, busy lizzies and similar flowers are blooming now, and should continue to brighten the winter months until they die off when the heat appears again around June.

So it really shouldn't surprise me that seeds sprout and grass appears as soon as the rain does.

Looking closely, though, there appear to be two different kinds of grass.  One, coarse and irregular, is set back a bit from the trail.  But there also looks like much finer grass sprouting more closely to the edge. 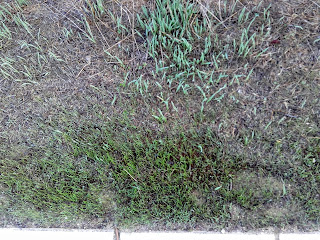 I don't recall it happening like this before. Or not so suddenly, anyway. It seems unlikely that someone would have sown grass seed, although that's what it looks like. Maybe it's happening so rapidly because this year the onset of rain has coincided with the temperature reducing somewhat, making an ideal environment for the grass to grow.
Posted by Sue at 15:54