So, after a couple of weeks of wall-to-wall sunshine, and unseasonably warm temperatures, we had some rain yesterday. Half an hour or so late morning - quite heavy - and some light rain in the evening. That was fine: we do need the rain, after all.

This morning, we woke up to more rain. We were up in good time, and by about 8am the rain seemed to have stopped, though it was still rather grey. Richard hoped to start painting King Malu today, so we decided to do our big monthly shop at Metro supermarket, first thing.

We spent a horrendous amount of money for one - admittedly very full - trolley of groceries. There weren't even many fruit and vegetables, since I get most of those at the local Froutaria. We picked up three bags of the slightly older apples, oranges and carrots which were on special offer, but no more. I did buy quite a bit of meat - chicken breast was on special offer, and we also bought some stewing steak, mince, and boneless chicken thighs... my supply of frozen meals is running low so I need to make some more slow-cooked dishes.

Then there were the 'staples', which tend to be pricey in Cyprus. Dishwasher powder and salt, cat food, canned tomatoes and baked beans, frozen peas, coffee, molasses, several kilogrammes of flour, sugar, and so on. I bought some pineapple juice, rice milk and Weetabix since Tim will be home for Christmas in about ten days. Yes, this is - I hope - basically sufficient groceries for the next month, at least, other than the things I buy locally. Oh, and the turkey which we've ordered, and the cranberries which I hope will be available in another couple of weeks.

But still, adding up the amount mentally as the items went through the till was a bit shocking; the bill was in fact slightly less than I had estimated, but still more than I can ever remember spending before in one supermarket visit.

Perhaps it's so long since we've been there that the prices have gone up without me noticing..

The weather stayed fine while we were shopping, which was just as well since it took a while to load everything into the car, and we would have got rather wet if it had been raining.

Unfortunately, the winch system that we should be able to use to bring our shopping upstairs is not working at present. So it looked as if we were going to be up and down our stairs,carrying in supermarket bags, for several minutes. So we were rather pleased with our friends Sheila and Marie drew up in their car, and asked if they could come and change the books Marie had borrowed. Of course, I said... and wondered if they'd like to help carry things in! They obliged willingly, so we only had two trips up and down per person.

We chatted awhile, then Richard went off to King Malu, to work on the inside since it was too damp to paint the outside. I unpacked the groceries and put most of them away, then sat down to read and write some email.

About half an hour later the heavens opened. And it poured. We've seen some heavy rain in Cyprus at times, but I don't remember ever seeing quite such a concerted effort as this storm. It kept going for at least two hours, solidly.

It's very difficult to capture rain in a still photograph, but here's my best attempt. If nothing else you can see how grey the day looks in our neighbourhood. The flat roof over the road is shining with rain, and if you look hard you can see rain splashing off the street. At the bottom right of the picture you can actually see some rain, caught by the camera: 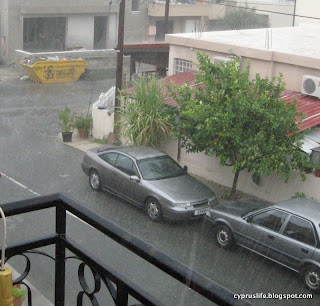 Even that doesn't show the incredible downpour. I think Terry Pratchett described best what we had today, in his excellent book for children, 'Truckers':

'..the kind of rain that is merely an upright sea with slots in it '

The problem with heavy rain is that our roof still leaks over our indoor staircase. So I placed not just the bucket, but the large coolbox on the stairs to catch most of the rain: 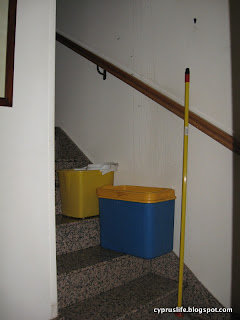 It was only dripping into these receptacles, but by the time the rain ceased, there were at least 5cm of water in each of them.

I shall be interested to see how full the Salt Lake is now.
Posted by Sue at 14:35

Do you speak any Greek?

I have been enjoying reading your blog here in an England that just won't stop raining these past few weeks! Shame the play park was vandalised. Anyway, don't stop writing the blog anytime soon as it makes fascinating reading - particularly to a Brit who, lately at least, dreams of warmer climes!
Best wishes from Torquay - Adam

Your description is lovely..Please do put up some pictures also..