Larnaka rain, and the bucket on the stairs

It's been cold, the last few days. The sun has mostly shone, but the temperature hasn't risen above about 12C, and it's been down to about 3C overnight.

This morning I awoke to the sound of gentle rain. Less chilly than before, but grey skies. We need the rain. Desperately. Cyprus is still relying on tankers of water from Greece, as well as the de-salination plants. The authorities give us mains water for about twelve hours, every other day, in the hope of encouraging people to use less. I'm not sure that we do, since our water tank is more than sufficient for two of us in the intervening time, but perhaps it cuts down some of the general wastage.

By the time I went out to a church service, the rain had stopped. It still looked a bit grey, though, so at the last moment I grabbed an umbrella. Just as well, since the heavens opened an hour and a half later as I was on my way home. Not with seasonal angels singing glory to God, or peace on earth, but with rain which got heavier and heavier, as I walked faster and faster towards home.

When I finally got back, my first move - after removing my rather sodden trainers and finding some dry shoes and socks - was to fetch our one and only bucket from our outside utility area, and place it strategically on the stairs. 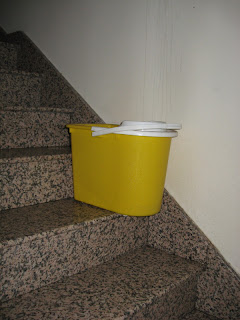 Many houses in Cyprus seem to leak somewhere in heavy rain. In our last house, we had several leaks, most of them in the living room and Tim's bedroom. Here we only have one, and it's conveniently over the stairs. They're not even carpeted, as UK stairs generally are, so cleaning up the water isn't difficult. But I still like to catch what I can.

We did have someone try and mend our roof a couple of years ago, when we discovered this problem. He fixed some loose tiles, but could not discover where this particular leak comes from. A couple of months ago, Richard crawled into the loft space in the hope of seeing daylight through wherever the hole is.. but could find nothing. The leak only occurs when there is heavy rain at a certain angle, depending on the wind, so it's probably getting in some gap under the roof tiles. There's probably nothing we can do about it, other than to catch what we can in the bucket, and mop up the rest.