Yet another public holiday in Cyprus?

We usually go to Metro to do our weekly supermarket shopping on Fridays. But we didn't need anything much today, so we didn't.

I did ponder popping around the corner to Orphanides Express to buy a few potatoes, and to see if they had any Marmite, as we are running low of both. But it hardly seemed worth it.

Then, this afternoon, I was feeling both tired and a bit cold. Not quite cold enough to put the heating on early, and not quite tired enough for a siesta... so I decided to have a cup of coffee.

Then I realised we had almost run out of milk. There was just a drop in the carton... nothing like enough. So, I thought, I'll just pop out now, and get some milk, as well as potatoes and Marmite.

To my surprise, there was no sign of life at Orphanides Express. There was a note on the door saying that all their stores would be closed on both January 1st and January 2nd. How strange, I thought. Obviously it would be closed yesterday - as it was last week on Thursday and Friday with Christmas and Boxing Day. But surely things are back to normal today?

Ah well, maybe they're re-stocking, I thought. So I walked a little bit further to Froutaria Achna, where I get fruit and vegetables, and which also sells milk.

It was also closed.

Over the road from the froutaria is a new Tesco Express. It was also closed.

I'm now wondering if January 2nd is yet another public holiday. Or perhaps just an extra break for the shops.

I walked just a little further, to our old faithful Perseus, the bakery, which also sells milk: 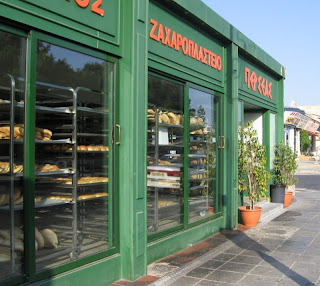 Perseus was open, as it is every day other than Christmas Day and Greek Easter. So I bought the milk. The potatoes and Marmite will have to wait until tomorrow.

By the time I got home again, I was no longer feeling either cold or tired. And the coffee was lukewarm. But I drank it anyway. At least I won't have to pop out early tomorrow to get some for Richard's coffee...
Posted by Sue at 16:14

We had the same in Limassol, went all the way in to go to Marks and Spencer and everything was shut!

What's Marmite, Sue.....sounds familiar but can't come up with anything.
Happy NewYear!

Suzanne - Marmite is a salty yeast extract spread, popular with Brits, and various other people around the world, although not found in the USA. When we lived there, we had to ask any visitors to bring us large jars! You probably came across it at Troodos; I expect the youth camp would have taken some,as would many other European visitors! Comes in a small black curved jar with a yellow lid.