It's still only November...

So I made my Christmas cake two and a half weeks ago. And this morning, since I woke much earlier than I needed to, I made this year's batch of mincemeat.

But both of those are better if given at least a few weeks to mature.

I've started thinking about this year's newsletter, too. And since it's still possible that I'll be in Germany next week, I hope to order presents online for relatives in the UK before the end of this week, and maybe even write some cards.

But we don't put up decorations until at least the middle of December. And I'm not going to listen to any Christmas music until at least December 1st.

So it was a bit of a surprise, when I walked to our PO Box this morning, to see that the Larnaka tree was up already. 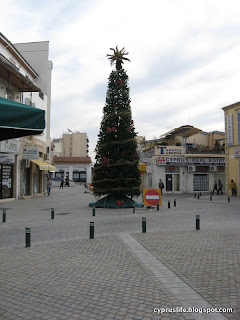 I suppose that 'no entry' sign means that nobody should climb it....
Posted by Sue at 16:55