The sun has shone all day. As it did yesterday. And Friday. And, indeed, most of last week, ever since the brief storms with rain and hail last Monday.

So much for the weather prophet who insisted that it would pour with rain mid-week.

It's predicted to continue this way - with temperatures up to about 22C during the daytime - for the next ten days.

Dressing in layers is important at this time of year in Cyprus. It's quite chilly first thing in the morning. By about 9am it's usually very pleasant; cool enough to need a light sweatshirt or jacket if sitting down, but warm enough to want to discard it if going out for a walk, particularly if carrying groceries home.

Yesterday I wore a thin sweater for most of the day, but did discard it once or twice. Today I've worn a light fleece, and have removed it several times. Now it's evening, it's cool enough to keep it on. It's not cool enough for the central heating to kick in - it's set to about 15C at present - and I quite like wearing an extra layer. I haven't regretted switching from shorts and sandals to jeans and trainers. Nor have we found the 9 tog duvet to be too warm at night.

The cats, who sprawled out on the floor or on the tops of bookcases most of the time during the summer are now enjoying their winter sleeping places. Cleo can usually be found on our bed, Sophia and Tessie on one of the sofas. Or my beanbag: 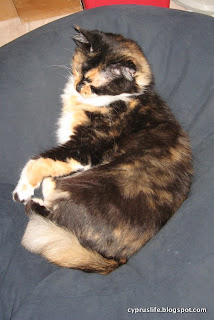 Richard had an interesting - and very Cypriot - experience this morning, when he tried to find out how to dispose of some out-of-date flares. Not 1970s trousers, that is, but distress signals for the boat.
Posted by Sue at 19:31