Some of the people who read this blog are remarkably observant. I was interested in a comment on this post about shopping in Larnaka when I was asked how on earth I could buy seven eggs.

It was a good question.

Most boxes of eggs in Cyprus, as in the UK, contain either six or twelve eggs. Or possibly fifteen; the free-range eggs we buy from Metro usually contain fifteen eggs, with three of them being extra value (fifteen for the price of twelve). And the next time we bought eggs, it was at Metro.

But a couple of days ago, I had to pop to Orphanides Express again for a few items, including more eggs. So before I decanted them into the fridge, I took a photo: 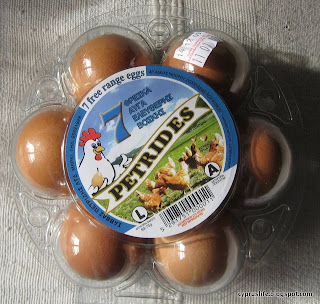 An unusual shaped box; I suppose if it were truly hexagonal they would be quite efficient for stacking, but since the edges are rounded I'm not sure why they're made that way.

And you might think, looking at it, that there are only six eggs... so I carefully opened the box in the kitchen, and took another photo, to reveal the neatly placed central egg: 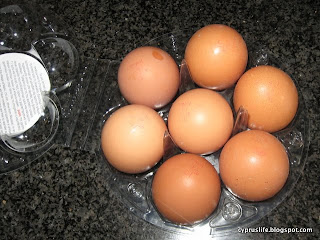 I'm so used to these boxes, even though they only seem to apply to this particular brand of free-range eggs, that I'd quite forgotten that seven isn't the usual number for egg purchases.
Posted by Sue at 21:03

Thank you for your nice posting.
it is really helpful to us.
such a nice topics.

I suppose that, depending on the size of your family, buying eggs in sevens can be useful at times!