Yesterday was a day full of board games.

In the morning, our young friends Marie and Jacob came over to play Risk with Tim. 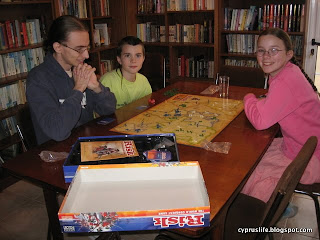 They didn't come until about 11.45am due to other commitments, and had to stop around 1.15 when Richard came home, so we could have lunch. The game was inconclusive at the end, but it looked as if Tim and Marie were fairly even, while Jacob was clinging onto Japan, and had nothing else.

After lunch, their mother Sheila joined us, and I played too, in a five-person Settlers of Catan. I forgot about taking a photo, but it was a good game. Sheila and Tim were ahead of the rest of us after an hour or so, both at 11 points... either could have won, depending on the throw of the dice. In the end, Sheila pipped Tim to the post.

A few hours later, the three of us walked around to Jörn and Sheila's for a six-person adult only game of Settlers of Catan. Actually it was a seven-person game, since their visitors Peter and Christin also joined in, but they played as a team. It was quite an interesting game too. I was remarkably tired, and not really concentrating at all, and seemed to be lagging behind. It looked like a race to the finish between Sheila (brown), Richard (red), or Peter and Christin (green). Only Sheila had building spaces left, and she'd taken the longest street card although that wasn't necessarily permanent, so she had 10 points on the board. Richard had nine points; Peter and Christin also had nine, Jörn had seven (after losing the longest street card), Tim had seven, I had eight... although I really wasn't counting at all, and somehow thought I had seven. I was pretty sure Sheila was going to win.

Then I noticed that I, too, had another building spot. I had the cards to build, too. And - having just bought a couple of development cards in the previous round, and having already played a couple of knights - I realised I could actually play a third knight and take the largest army card, since nobody else had it. I almost didn't... but, shrugging inwardly, thought I might as well, then anyone else (such as Sheila) would then need four knights to take it from me and it might prolong the game a little...

So I was rather surprised when Sheila told me I had 11 points, and asked if I had a victory point card. I did... I'd picked that up right at the start of the game - which meant I had won. I didn't actually believe it at first and counted my points a couple of times... but she was correct. Just as well she counted up, or I wouldn't have noticed. 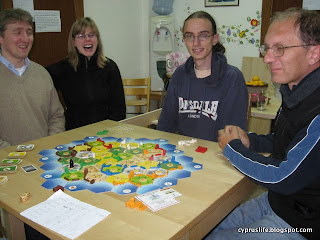