I'm sure we only just started December. Although, thinking about it, December 1st is a LONG time ago.

Well, maybe it's the middle of the month... I just wrote all our cards and newsletters a day or two back, after all. Or so it seems. The history monks really go wild in December, and suddenly, here we are, without warning, on Christmas Eve. The shops are now shut, so if anything hasn't been bought, it's too late.

We didn't do any decorating until this week. I thought about it at the weekend, but it wasn't until Tuesday that we did our final bits and pieces of gift buying locally, and also found this year's poinsettia at a local plant shop. 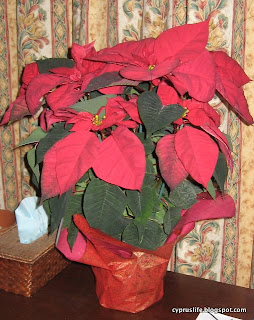 In the afternoon, I asked Tim if he would get out the tree. He even put it together. I always like rediscovering decorations from previous years; not that I'm really into nostalgia, but they feel like familiar friends. 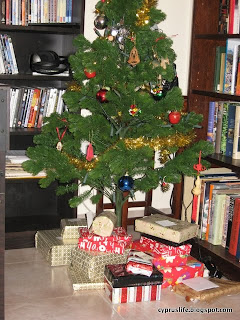 I put out our usual small candle decorations too, and found the Christmas tablecloth. We were having some friends for a meal Monday evening, so it was nice to have the house looking Christmassy at last. 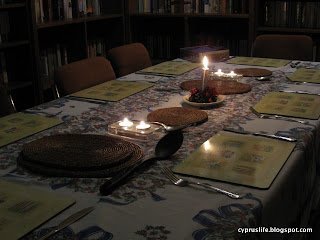 When we ordered our turkey, ages ago at the start of December, we wisely asked to have it available on December 23rd. Last year we did our shopping on Christmas Eve, when the supermarket was packed. It was quite stressful. But yesterday there was hardly anybody in the supermarket. We bought rather more than just the turkey - in fact we managed to spend sufficient to be given two free bottles of wine - but it took less than an hour. No queues, no noise, no overwhelm from crowds.

We played games in the afternoon and evening yesterday, so I didn't get a lot else done. But today I didn't have anything planned. I thought I would do a bit of baking, and relax. Richard was out working on King Malu again. Tim had a short music practice this morning and a youth band practice in the afternoon. A nice peaceful day.

I went out to the Froutaria this morning. The day was pleasantly warm and sunny. Tim was making two sorts of stuffing for the turkey, which we always cook on Christmas Eve. He had it in the oven by about nine o'clock, and we enjoyed the aroma of roasting turkey all morning.

I thought I might make some mince pies until I remembered that the oven was fully occupied with a large bird. So instead I made royal icing for the cake. I put the marzipan layer on it on Tuesday. When I'd rough iced it, there seemed to be a fair bit of icing over, so with vague memories of having piped a decorative grid on a Christmas cake when I was at high school (many, many years ago) I delved into my cookery books until I found instructions for making a greaseproof paper icing bag. I even found some plastic nozzles in the back of a drawer.

I'm far from artistic, but I was fairly pleased with the result: 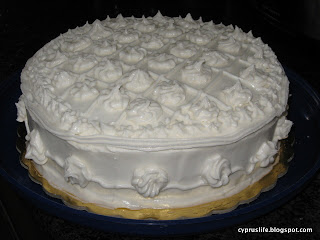 There was still some royal icing over, so I added a few drops of peppermint essence and some more icing sugar to make it rollable, and cut out about twenty peppermint creams. Then I also made some dairy-free chocolate fudge. It had a sad accident when Sophia, driven wild by the smell of the turkey, leapt onto the work surface. We found a pawprint at one end of the fudge... but, alas, forgot to take a photo.

Richard got home about 5.30pm, and set to work carving the turkey, and placing it tidily in a large roasting pan, which is now in the fridge. He shut the cats in the living room, where they tried every trick they could think of to get through to the kitchen: 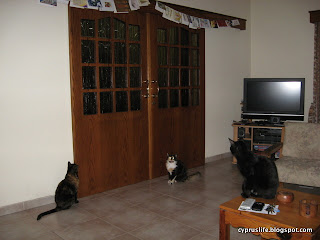 Eventually their pitiful cries, reminscent of half-starved feral cats, gave them their reward of a few scraps of turkey.

Then we bought a meal from our favourite takeaway place (Souvlaki Express), and, just for a change, played a game of Carcassonne. We're all tired, and I still need to make some mince pies... but perhaps that can wait for the morning. I'm certainly not as stressed as I was last year on Christmas Eve.
Posted by Sue at 18:41

Glad you had such a nice Christmas.
Your cake is beautiful.
Glad to hear other people eat the leftovers from Christmas.
Now have a wonderful new year.
Betty G