I'm very glad we live in Cyprus this year. The UK has been suffering bitter temperatures, along with snow and ice. People might idealise white Christmases, but in reality they disrupt plans, make heating bills soar, and generally make people cold and miserable.

Whereas we have had one of the warmest Christmases I can remember. It must have been about 20C during the daytime, and sunny for most of the day.

I woke up early, and finished the food preparation I'd planned. I made 36 mince pies (I had made the pastry on Christmas Eve, so it wasn't difficult). I made a trifle, too, since I didn't expect the visiting children to eat Christmas pudding. I made some ice cream, and I put two puddings on to steam. Tim got up about an hour and a half after I did, and peeled several large potatoes, cutting them into small pieces for par-boiling and roasting. Then, since we'd cooked the turkey the day before, and it was neatly carved, covered and refrigerated, I cleaned the kitchen and had my shower, and we then opened our presents. As always it was lovely to have new books and DVDs, and I was also very pleased to have been given expansions and extensions for our current favourite games: Settlers of Catan and Carcassonne.

At 9.15 Tim left to walk to Larnaka Community Church where he was playing the keyboard, so I had my breakfast then tidied up a bit more, and left around 9.40 to walk there myself. It was an hour service with no sermon; nice to catch up with friends from various places (since some of the Protestant church congregations in Larnaka don't have a Christmas Day service) and we were home again by 11.30.

Our friends arrived shortly after 12, and we had an enjoyable day. The food was all ready just after 1pm: 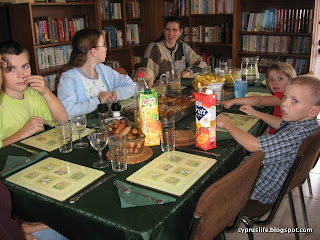 and there was something that everyone liked. We had a pause after eating before producing dessert, since we were fairly full of turkey, home-made cranberry sauce, sausages, potatoes and various vegetables.

After Christmas pudding, mince pies, brandy butter, trifle, ice cream, dried fruit, and coffee, we cleared the table and reduced it in size, so we could play one of the Settlers expansions. Most of the children decided they'd like to watch the end of the first Narnia film, which they started watching a week or so ago, and when that was finished they thoroughly enjoyed seeing the 'extras', about how the film was made. Even Katie, who is four, was entranced by this, and Helen (fifteen months) was conveniently taking a nap.

Since this blog is about Cyprus, I've started a new one solely devoted to our games of Settlers and describe our Christmas Day game, the first scenario of Seafarers of Catan, in detail there. Suffice it to say it was a good game, if a little shorter than we expected, and we can see that there's a lot of potential for this new version of the game, once we get used to it. We also look forward to playing the other expansion in future.

After we'd finished, and packed everything away, we chatted with our friends, who are soon going away for six weeks so we shall miss them. Around 6pm we produced the Christmas cake, and various other bits and pieces of food, and everyone had something to eat although none of us was particularly hungry.

Then Helen sat on my lap, while Tessie sat on Tim's, and we helped her learn to pat and pet Tessie gently. Both seemed to enjoy it. 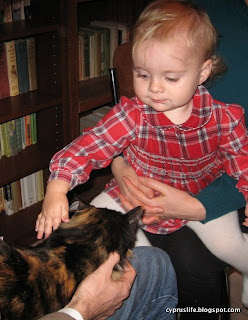 After that we listened to Tim, accompanying Marie on violin, playing a Vivaldi piece which Marie has been preparing to play at her uncle's wedding. Then, after more chatting and nibbling at snacks, our friends left. We loaded the dishwasher again, and I cleaned up the last few bits that wouldn't fit in it (since we were entertaining other friends at lunch-time today) - and got to bed shortly after ten o'clock. I thought I might read for a while, but was so tired I couldn't even manage one chapter.
Posted by Sue at 19:13