My favourite fruit shop in Larnaka

So, at the end of a month where - having joined the so-called 'NaBloPoMo' challenge - I have written a new post every day, I thought I'd end with a confession.

Those who know me well will not be surprised. Nor will anyone who's regularly been reading about my life in these long-winded and rambling posts. But I'm constantly amazed at how many people assume that all women naturally like to shop... and shop... and spend lots of money.

Having said that, I can spend hours in bookshops, either real or online, and if told I had to spend almost any amount of money there could easily do so. Generally, though, I don't. And while I know that some shopping is essential - food, and the occasional clothes, primarily - it's not something I particularly enjoy.

With only two of us at home, we've got into a routine of going to the Metro supermarket about once a month, which is fine. In between times, I pop out on foot to the local Orphanides Express, or Tesco Express, or possibly one of the bakeries, or - what is probably my favourite local shop - the Froutaria Achna. 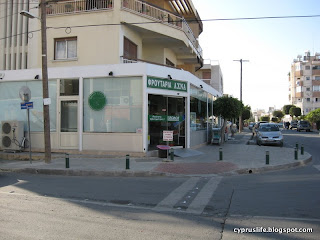 A froutaria is the Cyprus equivalent of a greengrocer, although it also generally stocks various other general groceries as well.

That might sound upside-down; instead of doing a bit supermarket shop once a week, I have to go out maybe three or four times per week for fruit and vegetables, milk, and anything else we might happen to need. But for some reason I'd much rather spend five minutes in a shop three or four times per week than forty-five minutes or more trying to buy everything in a large supermarket.

I also like having really fresh fruit and vegetables. I know I've written before about Froutaria Achna - at great length, only four months ago. But I continue to enjoy going there - as much as I can ever enjoy going to a shop that doesn't sell books - and coming home with not just what I intended to buy, but a bargain or two as well. Today, for instance, I wanted some oranges to squeeze for tomorrow morning's juice, and a couple of medium potatoes.

When I got to the froutaria, I saw that in the discount section, there were some huge and rather nice-looking cauliflowers. We both like them, so I picked one up. And then I remembered that we were a bit low on cherry tomatoes, so I bought some of those too. I did resist the temptation to pick up any fruit other than the oranges, since the cauliflower was pretty heavy, but will no doubt be back there on Wednesday or Thursday.

And for those who like to know details about the cost of living in Cyprus:

Email ThisBlogThis!Share to TwitterShare to FacebookShare to Pinterest
Labels: froutaria

Sue...our califlower is $2.50 per head not by the pound. Don't think they weigh 5#'s. Other things mentioned don't have the flavor you have in Cyprus. We loved the Cyprus potatoes.