A week ago, I realised that we had stopped using our ceiling fans. One by one, we slowed them down, finally turning them off so that the lights work without them.

Which meant that we could start using candles again. And since, in the Anglican Church year, it's officially 'ordinary time' (despite this year having been anything but ordinary) I got out a green candle. We'd used it a few times previously, but it still has plenty of wax, and there's something special about having a candle lit while we're eating, particularly as it's now dark well before supper-time. 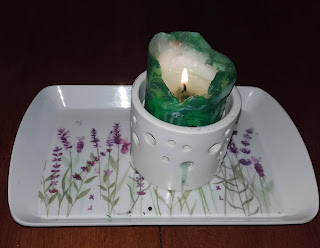 It's not something we've done regularly over the years. We've often had a candle on the table around Christmas-time, but not long-term. However we've been given candles as gifts, from time to time, so I had quite a collection of them in my ornament cupboard, a few un-started, some of them slightly used.
I suppose the idea of using them regularly started last December. Instead of lighting an elderly or small candle, we actually bought a new one, and lit it at almost every main meal over the Christmas and New Year season: 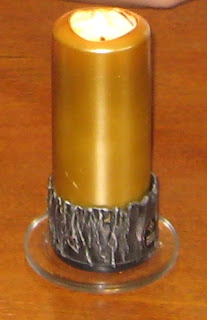 When it had almost gone, we realised that we liked having a candle, so I got out a red, star-shaped one. And when that started to collapse, I found a spherical pink one: 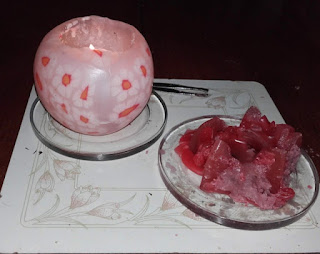 We had realised that having the candles on little glass plates was all very well, but if wax dripped off it went onto the wood of our table, and that wasn't so great. So we were using a table mat, but that wasn't ideal either.
At the end of January, when we were briefly in the UK, we took Richard's mother out to eat at a garden centre, and she bought us a little tray that I had been looking at - one which I thought would be ideal for candles.  The spherical pink candle was burning low, so I added a purple one, and the tray caught any drips perfectly: 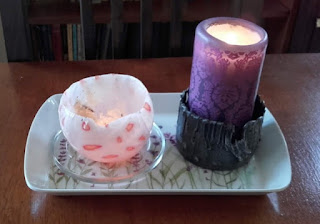 By the end of March Cyprus was in lockdown mode; we lit a special candle to have in the window, on days when the world churches were praying specifically about the pandemic.  And as it was Lent, traditionally a time for purple linen in the Anglican church, we were using two purple candles: 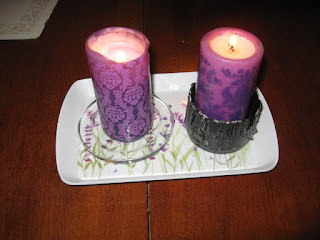 I should add that I had not previously previously noticed liturgical colours. But during the lockdown, we started a new Facebook page for St Helena's Church, and I thought it would be a good idea to have a photo of the communion table area with the appropriate coloured linen. So I started taking notice of the colours used - and we just happened to have unused purple candles.
By the time Easter came around, the purple candles were pretty much used up, and I remembered that, years ago, we were given a orange candle as an Easter decoration. So I decided we would burn it this year: 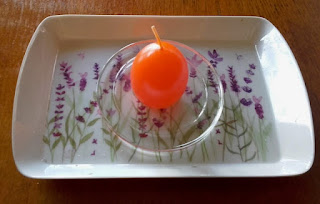 We were starting to take our candles for granted; lighting them at mealtimes became a routine. And then the weather got warmer, and in the middle of May, when Summer really started, we switched on the ceiling fan in the dining room while eating.
Ceiling fans and candles are not compatible. The candle went out.
I moved it to the other end of the table, but it didn't help.  So, as ceiling fans seemed to be much more important during the summer months, I cleaned the tray, and the little glass plate things, and put them all away for five and a half months.
There were a couple of scented candles in my cupboard, but I really don't like those - the scent gives me a headache, and I know that scented candles can be toxic for cats. So I got rid of them. I don't know where they came from - possibly gifts, or more likely a 'gift exchange' game with former colleagues around twenty years ago.  I don't like throwing out anything that isn't rubbish, but reminded myself that I was never going to use them, so it was really just decluttering, which is generally considered a Good Thing.
The only ones left in my cupboard now are white; we also have quite a lot of tea-lights. But we bought them from Ikea - and although they seemed like excellent value, they don't last very long, and don't burn all that evenly.
Perhaps we might even buy another new candle to use in December....
Posted by Sue at 20:21

Hello Sue, thank you for the lovely blog about your candles, the liturgical colours, everything.
So yes, you certainly can write about candles.
I love them, we usually only burn them at Christmas, but occasionally I feel the urge to add brightness to an evening, now that the increasing darkness of autumn is drawing us indoors.