The Benefits of Board Games

I grew up in a family that played both board and card games. One of my grandmothers played bridge at a very high level, even (so family legend has it, anyway) playing for Scotland at times. She taught us to play Whist, and Hearts, and Rummy, and - eventually - Bridge. My other grandparents taught us to play Crazy Eights, another card game which, as I later learned, is the same idea as Uno.

At home, my siblings and I would sometimes play Canasta, a card game that didn't necessarily require four players. We also played a lot of mah-jong, a bit of Scrabble, and various other games that we acquired, some better than others. Monopoly was popular with some of my siblings, although I found it a bit stressful. I have lots of memories of family board games on Christmas Day, or on holidays, or - as young adults - Sunday afternoons.

I played board games with school and church friends too; I had quite a collection of two-player games. Mastermind was a favourite, as was Quandary. And I helped to run the Chess Club at my secondary school, although I was no expert at the game. But I couldn't remember a time when I didn't know the rules, or those of draughts (also known as checkers).  Then there were pencil-and-paper games for the car, or the back of class in a dull physics lesson...

When we moved to Cyprus, we didn't take many games with us other than small packs of cards and travel games, so we were very pleased to discover that the Thrift Shop had quite a selection of games.  We learned, from colleagues, to play Rummikub and acquired a set of our own.  As the boys turned into teenagers, computer games became more interesting to them, but we still tried to play a family board game at least once a week.

By the time we moved from our rental house to the one where we live now, we had sufficient different games to fill a biggish box - and since our cat Cleo insisted on sleeping in the packed game box, I even have a photo of it: 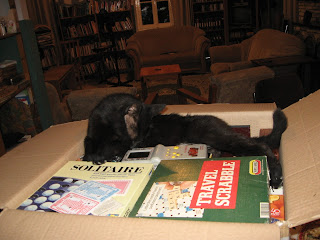 All too quickly the sad day came when both our sons had left home, and we were 'empty-nesters' for the first time. Amidst the adjustments, and the sadness that was sometimes overwhelming, I had the sudden awful thought: that we would no longer have the opportunity to play board games. Richard doesn't like games involving playing cards, and two-player Rummikub isn't all that interesting. He's not much of a fan of Scrabble, or other word games... and besides, we couldn't see ourselves sitting down to play a board game with just the two of us.
Within six months, we had made new friends; one couple who were happy to play Scrabble with us, and then other games, some of which they bought and brought back to Cyprus from their visits to their home country. And the family who were keen game-players, who introduced us properly to Settlers of Catan.
Fourteen years later, we can't imagine life without playing games regularly. During lockdown, we played games over the internet; not ideal, but better than nothing. 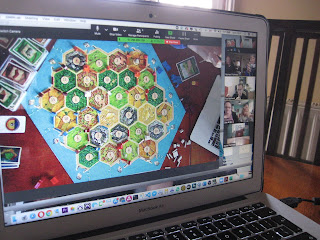 And now, at least for the time being, since we're allowed to have up to ten people (including us) in our house, we're back to our normal schedule of regular board games. Many years ago we established that every other Sunday afternoon our friends would come over for the afternoon and evening. The under-18s watch a film while the over-18s play a Catan game, usually Cities and Knights. There's something about Catan games that makes them eminently re-playable, and we're so familiar with them now that we carry on conversations while playing.
Today we finished our game in under an hour, though it wasn't a creaming: we were all quite evenly matched right up to the end. So as the girls were still watching a DVD, we played a couple of rounds of Kingdominoes, a game one of our sons gave us for Christmas a couple of years ago, which advertised itself as the kind of game you play when you've finished something else and have half an hour or so available. It's a simple game that can be played by quite young children, but has some interesting strategies too, and each game is somewhat different. 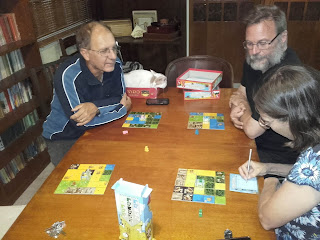 If you look carefully, you'll see Alex, our large white cat, asleep in the Settlers game box, where he had established himself an hour and a half earlier. Our cats are very keen on game box lids.
We also established, about six years ago, that my friend and her daughters come over on Tuesday mornings. When they were little we read them books, and they coloured, and played with Lego. Now the youngest is ten, we play board games every week.  Sometimes Settlers, sometimes Probe, sometimes Mastermind, Probe, Rummikub... as well as regular games of Ligretto, a fast card game that I like very much, despite not being particularly good at it.
A few years ago we also got into the routine of playing Cities and Knights with our adult friends one mid-week evening every week, and nearly three years ago we decided to play a non-Settlers game every Saturday evening. We had been given several excellent board games, but didn't seem to find the time to play them sufficiently to think about any kind of strategy. Our games cupboard was filling up, and there were some games which we played so rarely that we felt almost as if we had to learn them from scratch every time we played them. 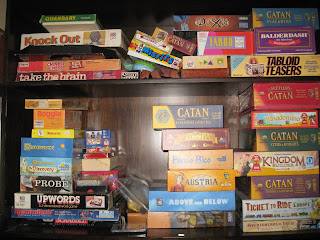 So we played, in turn, Agricola, Above and Below, Puerto Rico and Grand Austria Hotel, once a month each for a year, then in 2019 introduced a few others to the mix as we became familiar, at last, with these diverse games.
I keep the games roughly organised, as seen in that photo, with the 'party' type games at the top right, and the ones we like playing the most, the strategy games with tangible pieces and boards, on the bottom right. At the top left are the two-player games, and at the bottom left are the others - the card-based games, variations on Carcassonne, Rummikub, Upwords and so on.
I learned recently that the ones I categorised as strategy games are known as Euro-style games, or German board games. Most of them originated in Germany, which apparently is an excellent country for creating coherent, interesting board games.
Occasionally someone who hears that we play games regularly raises their eyebrows, or looks confused. 'We used to play Monopoly with the children...' they might mutter. Or 'I suppose the occasional game of chess whiles away the time.'  But there's so much more to it than just entertainment. For one thing, playing games is a great way to socialise, to build up and establish friendships.
Of course, board games are important for young children, to help them understand the importance of taking turns, of being patient, of low-key competition in a friendly way, where it doesn't matter if one wins or loses. Some children are naturally gracious losers, others find it more difficult; but by playing a variety of games, where each child will succeed at times (even if, at first, subtly helped by the parent) they should gradually learn to accept that other people will sometimes win too, and that concentration and developing skills can help them improve.
For older people like us, playing board games helps to keep our minds active. It also encourages us to exercise our strategic, tactical, logistical and diplomatic skills - the four different 'intelligences' connected with the four temperaments as identified by Keirsey. A board game is an excellent way to develop our least preferred intelligences, and to see their usage in a non-threatening environment.
Since someone else has written a useful article, I'll link to this interesting page about the benefits of board games as it explains some of what I've mentioned, in a bit more depth.
Of course, computer games have some of these advantages too - and when they're social, played on Facebook with friends, just taking one or two turns each day, they're a nice way of staying in touch and another exercise of strategy, fast thinking or whatever is needed.  I play Lexulous - similar to Scrabble - online, and usually have about eight or nine games ongoing. I play one or maybe two moves per game per day - it's hardly time-consuming.  Another social game I play with three different people, at present, is Word Blitz; it's essentially a quick version of Boggle, with Scrabble-style scoring.
But there's nothing to beat a group of friends or relatives around a board game, and we're very thankful that, so far, we're still allowed to do this in Cyprus.
Posted by Sue at 22:18