Technology, top-ups and a scam...

On the whole, I like modern technology.  Some of it, anyway. Kitchen gadgets make cooking and baking so much easier and more efficient than in the past. Digital cameras are a great improvement, in my view, on the kind with film which had to be processed, and I love being able to make photobooks after scanning old negatives. My slim, sturdy photobooks replace the old, wide albums with faded prints, some of which have started falling out.

I am also very thankful to be able to have good video communication with my sons and grandchildren in the UK, particularly during this pandemic when there's no chance to visit each other.  And after being dragged rather reluctantly into the smartphone world, I have to admit I like having a phone that can connect to the Internet, allowing me to use WhatsApp, and to check email, news sites or Facebook quickly when my computer isn't on.

There are many other advantages to modern technology, most of which I take for granted. And while I'm no great whizz at technology - not compared with my close family members, anyway - I can mostly get things to work fairly easily. I sometimes feel as if I'm pushing the boundaries of my knowledge, but that's not a bad thing.

However, today I realised I had to top up my phone 'pay-as-you-go' credit. One of my least favourite tasks.

I only knew it was that time of year because I happened to make an actual phone call to Richard to see when he was coming home for lunch. Before it connected, a robotic voice informed me that my phone validation period was ending, and I had to top up immediately.  I had not received a text message or any other alert about this. Had I not made one today, or within the next week or so, I might not have known until everything stopped working, and could possibly even have lost my phone number.

I write texts rather more than I make phone calls - and use WhatsApp or Facebook Messenger more than sending texts. Looking at my logs, the last time I made a phone call was (also to Richard) a couple of months ago. I don't use up much of my credit, so I never run out, and the validity period of each ten euro top-up is just a year.  I think it would take me about five years to get through ten euros' worth of credit, since text messages only cost two cents each. Indeed, the only way I know how to make phone calls is to go to the text message area, find the person I want to phone, and click the little phone icon. I've never worked out how to make a call to a person (rather than just typing in a number) from the place that is supposed to be for phone calls.

Ten or more years ago, I topped up by buying a card at a local shop, and then following the instructions on the back. Or, more likely, asking one of my sons to do it. But I knew I could do it online, through our bank. So I logged into that, chose to top up my SoEasy account with another ten euros, entered the one-time code from my phone... and ten euros was deducted from our bank account. That part was easy.

After doing it, at the top of the bank screen was a 16-digit number which said it was my secret code. I copied and pasted it quickly, so I didn't lose it. But what to do with it...?

As ever, Google was my friend. It didn't take long to find this:

Right.
I called 1882 and a voice asked me to type 1 to top up my phone. I typed 1. The voice asked me to type in my 16-digit code, and press hash. I did so, a tad concerned that the 1 was showing at the start of it in the only place where I could type, and there was no way to delete it. So I wasn't too surprised when the voice told me the code was wrong. Or, rather, it said that the code had expired, which was a bit odd. Then it asked me to enter it again.
So I carefully typed the code in again. 16 digits is a lot of numbers to type in, some of them repeated, but I checked it, hit the # key... and the disembodied voice told me that the code had expired and that I should try again.
Sigh. I was carefully checking each digit, when the voice said it was still waiting. I don't like impatient robot voices, so I ended the call and thought I might try the other method.
Happily, the second method worked perfectly, and a voice told me that my phone had been topped up by ten euros.
Whew.
Then I received a text, telling me I should have topped up some other way to receive rewards.  But it said I could go to a website and see what bonus I might get there. I typed in the lengthy URL of the site, and the code I was sent.... and received this: 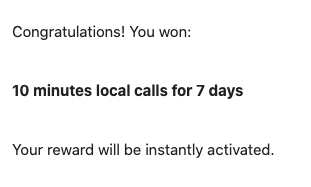 I checked my logs again. My call today was 16 seconds long.  The previous call, two months ago, was 13 seconds long.  The one before that, in June, was 39 seconds long.
I did then discover a call I made in May which lasted five minutes; I have no idea what that was about, or why I would have such a long conversation.  But I shouldn't think I've made ten minutes' worth of phone calls all year - so my 'reward' is unlikely to be claimed.
Still, I won't have to do that again for another year.
Something else happened today that was a bit disturbing. I received an email, purporting to be from a local friend, asking if I could do her a favour.  Slightly odd phrasing, but I responded and asked what she wanted. The reply said,

I am sorry for bothering you with this mail, i need to get an Amazon gift card for my Niece, Its her birthday but  I can't do this now because I'm currently out of reach and i have a little issues with my amazon account, can you please get it from any store around you or try buying online for me? I'll reimburse you hopefully this weekend.

It didn't sound like the normal style of the supposed sender, but it didn't seem impossible (though I was puzzled as to why she thought I could find an Amazon gift card in a local store).  So I responded, cautiously, that it might be possible but I'd need to know the details, the message to be sent, etc.
The reply, almost immediately, said:

I need you to send it today, All i want is amazon gift card, Amount needed is €100

There were lots of triggers there, telling me this was wrong: the bad grammar, the request for such a large amount, the currency being euro when I knew that all this person's relatives were in the UK.  No way was I going to buy such a huge gift card for anyone, so I responded that I was not going to do that.
I then noticed that the email address was NOT the normal one for this person. The first post had (apparently) come from that email address, but the 'reply-to' email was a different one, starting the same but with a different provider.
A quick Google search revealed that this, or something similar, is a well-known scam.  So I reported the message to my email provider and didn't respond further.
I'm usually fairly good at spotting scams, fake news, and false information on Facebook, so I was a tad embarrassed that I even considered for a moment that it might be real. But thought it worth posting a warning in case anyone reading this receives anything similar.
Posted by Sue at 17:45