What a strange year it has been. Time has dragged at times, raced by at others. Here in Cyprus it hasn't rained for six months, although we hope it might do so some time this week. We've had hotter temperatures, each month since April, than ever before. There have been earthquakes, fires, explosions, violence, political unrest... and, of course, the pandemic.

I just looked back at a post I wrote in March about preparing for lockdown in Cyprus. It all seemed to happen rather quickly. Six weeks earlier we had been in the UK for my nephew's wedding, and were vaguely aware of a virus in the Far East. We were sufficiently aware that we had abandoned any thought of going on a mini-cruise to celebrate my special birthday in April, but had no idea that it was going to dominate the world, nor that it would last so long.

During the later part of the summer, things were almost back to a new kind of 'normal'.  Tourism was down significantly, even after the borders opened again, due to the need to have a negative Covid certificate before flying. But there were still some brave tourists who came; maybe they were desperate for some sunshine. It wasn't tourists who brought the virus to Cyprus, however, it was locals - Cypriots and residents of the island - returning from family reunions.  But case numbers stayed low, as they did during most of Europe during July and August.  Then in September Spain started seeing a new wave, quickly followed by other countries in Western Europe.

In the past week, numbers in Cyprus have risen sharply. A week ago masks became compulsory outside as well as inside, unless we're exercising or alone.  We're still allowed to meet in groups of up to ten in our homes and gardens; we're still allowed to gather, with masks and physical distancing, at churches. Theatres and cinemas can operate at 50% capacity, with masks and distancing. Restaurants are open, with tables further apart than previously, no buffets, and no more than six people per table. But everyday life is continuing. We have been able to go out and about as much as we want, so long as we observe the regulations about masks, and are careful not to get too close to strangers.

The UK has just announced another set of restrictions in the hope of curbing the scary rising numbers there. Many countries in mainland Europe have introduced different measures, some stricter than others.  And with winter approaching, it could be a whole lot worse than it was in the spring. Tomorrow the Cyprus government is having another emergency meeting. We don't know what they will decide. Will we no longer be allowed to meet with friends? Will restaurants close, other than for take-away? Will churches have to stop running services...?

Yesterday morning I went for a walk with my friend Sheila, first thing. I don't know if that will be allowed any more, although restricting outside exercise doesn't seem like a good idea, now we know more about the virus and the way it works.

We walked to the aqueduct, and were startled to see a sharp drop-off where there used to be a path.  Perhaps sewers will be installed - hopefully it will be possible, eventually, to walk over to where that low bridge is showing on the left of the photo. 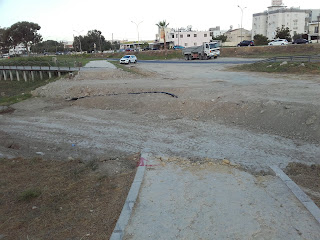 Here's another view of the way the path stops abruptly, looking towards the aqueduct: 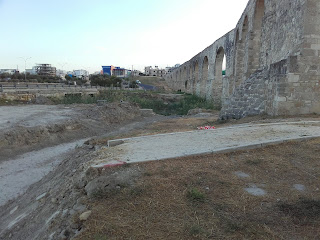 It was a pleasant walk, with temperatures a degree or two cooler than they had been first thing. Sometimes when we're walking we chat so much that I don't notice anything around me. But yesterday I realised how many wildflowers were still blooming, despite the six-month drought: 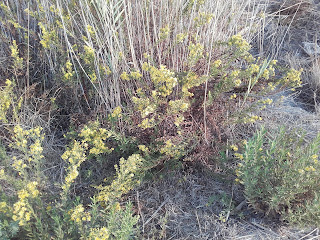 These purple ones, too, which I think are a kind of parasitic bindweed, seem to be flourishing in many places: 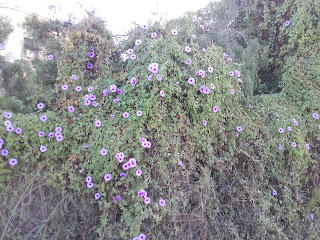 Later in the day, in honour of the slightly cooler temperatures, when I changed the sheets on our bed (as I do every Saturday) I put a duvet cover on top rather than just a flat sheet. And we didn't use the ceiling fan last night. I put out the warm cat beds, too, although they haven't slept in them yet: 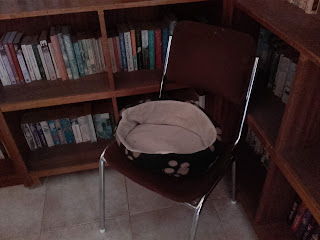 This morning we went to St Helena's, and sat outside after Richard had set up the equipment for live-streaming, as usual, and ensured the outside loudspeaker was working. There weren't many in the congregation. Having to wear masks outside is frustrating although it makes sense. It's All Saints' Day, so the inside of the church had white linen: 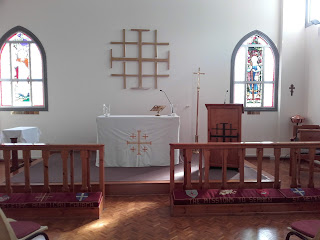 One of the hymns was one which, as a child, I was convinced started, 'For all the saints who from their neighbours rest...'

There's a sense of what I can only describe as negative anticipation right now, in people I talk to here and online. It's almost worse than back in March when we really didn't know what we were facing.  Then, we hoped this thing might end during the summer. Now we know it hasn't gone away; cases are increasing more rapidly than ever.  We haven't seen any of our relatives since the start of February, and are unlikely to do so before at last March or April next year; only then if a vaccine (or much better treatment) is discovered and available.

I know things were much worse a century ago, with the 'Great War', followed by the horrendous Spanish flu pandemic that decimated the world population, including many children. As well as much better medical facilities and research, we have the benefit of technology to communicate with our loved ones. I read stories over Facetime to my grandchildren regularly, and we've even managed to play a board game a couple of times. They're quite accustomed to an online relationship with the extended family, and it means they don't forget us, which is wonderful. We have much to be thankful for.

But still, the outlook is depressingly bleak on many fronts.

I am thinking of updating this blog every day during this month, although I make no promises.

It's certainly a strange old time isn't it. I go between thinking how awful it all is, to remembering it could be worse in so many ways, to being thankful we are in Cyprus, and so many people are dealing with all kinds of suffering, and a million other thoughts.

I look forward to reading more of your updates and thoughts.