It's just over ten years since the 'Green Dot' company introduced recycling in Larnaka (and elsewhere in Cyprus). We were a little dubious at first, but it's been extremely efficient. Every Monday evening, two large and noisy trucks drive around our neighbourhood, collecting the two different kinds of roadside recycling: the paper and card (in a brown bag) and the PMD (plastic-metal-drinks) recycling, in an almost clear bag.  Sometimes they come as early as about four o'clock, sometimes as late as eleven o'clock, but they come by every week. Even on public holidays.

It took us a few years to work out an efficient method of storing the things we planned to recycle, as we don't generate nearly enough to put out a bag every week. But in the autumn of 2014 we started using a chest of drawers in the kitchen rather than simply piling things in an overflowing trolley behind the freezer: 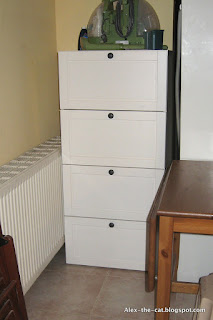 It's been moved since then, but the principle of putting the PMD and paper recycling in two separate drawers has worked so well that we still do that over six years later.
A few years ago we also placed two different coloured dustbins outside, one for PMD and one for paper. This enables any guests to put out recycling easily, and means that if our PMD drawer starts to overflow before there's enough to fill one of the sacks, I can put some of it in the blue bin. It also means that some of the advertising junk mail can go straight into the brown bin without ever entering the house.
Then a year or so ago we bought a crate to take the glass recycling. That isn't collected from the roadside; we have to take it to one of the green containers that can be found in various places. We usually remember to take it when we go to Metro, but not always. It generally takes a couple of months to be anywhere near full.
I now put out recycling for collection on the last Monday of each month. So this morning, in between rain showers, I filled the two bags from the kitchen drawers and the outside bins: 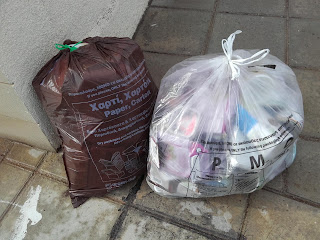 The PMD sack contains tetrapaks (squashed to almost flat), cans, a few plastic containers and some metal trays or lids.  Putting it out once a month means the bag is fairly full, but not overflowing.  The paper one is fuller than usual, but I don't think I put any out at all in October, so that's probably two months' worth.
A few glass items had found their way into the PMD drawer, so I moved those down to the outside crate.  This is what we've used in November: 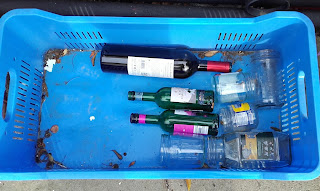 It looks as if there's plenty of room for December's bottles and jars, which is just as well as we forgot to take the crate when we went to Metro last week.
And if anyone is wondering whether our roof repairs held in this morning's rain - the answer is a resounding 'yes'!  Most of the rain was quite light, but there was a heavy downpour for about five minutes, and although I watched carefully, not a single drop appeared on our stairs.  It remains to be seen whether that will stay true in high winds, or in rain that lasts longer than five minutes. But it's a great improvement and we are extremely relieved.
Posted by Sue at 17:14