Rain... and an unexpected flood

Several people told us that there was a lot of rain on September 6th when we returned from our UK visit. But by the time we arrived back the sky was clear and the ground mostly dry.  We didn't have to water the plants for a few days, but the temperatures remained fairly high and there was almost no more rain. just the odd shower once or twice.

The Salt Lake - our friends told us - never quite dried out this summer. As I mentioned in the last post, in mid-September, when I started walking again with my friend Sheila, there was a fair amount of water in it.

But with the lack of any more significant rain over the next few weeks, we began to wonder if the lake might in fact dry out by the end of October.  Each week there was noticeably less water, and although we knew flamingoes had arrived in Cyprus, we didn't see any. Friends who visited early in the month saw some in Oroklini, not far away, but evidently there wasn't enough water in the local Salt Lake.

My brother and his family were due to arrive for a visit just over a week ago. The forecast looked very grim, with rain predicted for every day of their stay, and thunderstorms over the weekend. However, experience told us that when five days of heavy rain is expected, we might get one, maybe two. And even then, the rain is usually punctuated by sunshine.  Sure enough, although it rained on Sunday morning - the day after their arrival - it cleared up and stayed fine from mid-afternoon. That was good, as we had planned an outdoor evening get-together with a few friends.

The following day, however, it was a different story. I managed to pop out to the local shops in between a couple of rain showers, and by lunch-time the rain was pouring down. 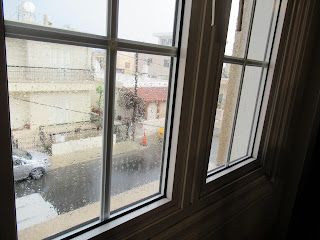 We could see water running down the streets, although the drains seemed to be working so that there wasn't a river in the road; we would have expected to see one a decade or so ago. I kept checking our stairs, where there's often a leak with very heavy rain, and was pleased to note that there were just a few drips. Evidently our roof tiles, finally fixed a couple of years ago, were still keeping the water out.

So we had a cold lunch, and were chatting awhile before my brother said he thought he would pop downstairs to our guest flat. The rain had slightly abated so it seemed like a good time to go down. We were still clearing the table, when he said, 'There seems to be something leaking onto the sofa...'

We went to investigate. Sure enough, there was a wet patch on the back of the sofa in the living room, and as we watched, another drip fell from the ceiling.

Richard shrugged. 'It's Cyprus,' he said. Heavy rain, he explained, can cause water to get in between the floors. There was nothing much we could do other than move the sofa out of the way and place a bucket under the drip.

'I suppose we should check whether something's leaking upstairs?' I suggested, a little tentatively. Years earlier we had a drip in about that place, and it was from a slow leak at the back of the toilet.

So he went up the stairs, and quickly came down again. There was, he said, a pool of water pretty much covering the entire upstairs floor.

Six years ago (I'm surprised it was that long!) we had a flood in our bedroom in the night, due to a small ball blocking the overflow of our balcony. For two or three years afterwards, we checked carefully, every time there was heavy rain, not wanting it to happen again. But we had pretty much forgotten about it, and were doing other things ...so didn't think to go upstairs or see whether the balcony was draining as it should last Monday.

A photo showing the rain on our balcony really doesn't do it justice. It must have been three centimetres deep: 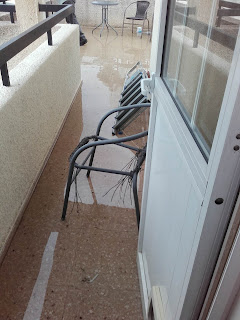 Richard splashed his way out and found that the overflow was blocked by bird mess, probably washed off the roof by the earlier rain. He used the end of a broom to clear it, and water started gushing out of the overflow, slowly draining the water from the balcony.

But the upstairs floor doesn't slope down to the door, so the next problem was trying to get rid of the water that was getting everywhere. Thankfully we don't put books or papers on the floors, and there's no carpet - everywhere in this house is tiled. The furniture is mostly solid wood, so we knew it wouldn't sustain damage if we could remove the water fairly quickly. But it wasn't a simple process. And really only one of us could work at a time.

So I began, first with a broom, sweeping as much water as I could from the bedroom towards the door. It wasn't very effective.

I next fetched our wet/dry cleaning machine, which sucks water up effectively. I decided to start in Richard's study where - thankfully - the water hadn't quite reached the wires under his desk. And, even better, there aren't many wires on the floor nowadays, because of our Roomba vacuum cleaner which has a tendency to try to eat any wires it finds.

However the Bissell cleaning machine tank doesn't have a very big capacity. Maybe a litre. And with water over most of the floor, it filled up in a couple of minutes, so I had to empty it. It's quite back-aching work using it on the floor. So by the time I had emptied it half a dozen times, with no appreciable reduction of the water level in the room, I decided to leave that idea for a while.

More sweeping in the bedroom removed a bit more water, and I then went to fetch the old-fashioned mop and bucket, which turned out to be the most effective method. The bucket holds about ten litres so it took longer to fill up, and after a couple of buckets full, the study floor was looking almost dry. The  cleaning machine then worked pretty well to get rid of the last few puddles.

One room done, and it had taken nearly forty-five minutes.

I did some mopping in our bedroom next, but was soon too tired and achey to continue, so, fifteen minutes or so later, Richard took over.  And, with a combination of sweeping, mopping and the wet/dry Bissell machine, taking it in turns, we did eventually get rid of most of the water. A few shoes had to be dried out, but the sun came out in the late afternoon, so that didn't take long.

A beanbag, in the room we still refer to as our younger son's, absorbed a huge amount of water and had to be dried out over the next couple of days. One bookcase looks as though part of the base has been somewhat destroyed. But everything else is now fully dried out, and - as far as we can tell - undamaged.

So we're very thankful that my brother spotted the drip when he did, and that we decided to check upstairs before it got any worse.

The following morning, not only did the Salt Lake look almost full, but the flamingoes were there. The tiny pink dots on the right-hand side of the photo (which you might see if you click to enlarge it) are flamingoes.  We have no idea how they know when there's enough water for their needs. 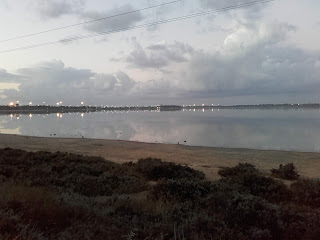 For some reason, heavy rain and Cyprus don't seem to match in my mind; but, your experience shows otherwise. I truly regret that you and Richard have undergone such a nasty experience. Hang in there, and I pray your next post will be full of joy.

Hope you had a wonderful Christmas!

Hope you had a wonderful Christmas!