Note that Tesco Express did not last long... it was replaced after about 18 months by Achna Discount, a very useful small mini-market which supplements the fruit and vegetables at the Achna Fruitaria just over the road.

I don't remember when I was first aware of a new, small supermarket being built opposite our favourite Achna Froutaria. 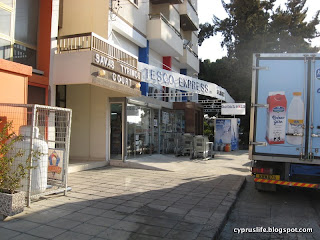 My gut feeling is this 'Tesco Express' appeared about a year ago. But the older I get, the more difficult it becomes to estimate time in the past. The present and future are a great deal more interesting to me; the past seems to telescope inwardly. So, I know it appeared after we moved to this house. And that was over three years ago. (How can it have been three years already?). I'm pretty sure it was after I started using the froutaria regularly, and I think that only happened a couple of years ago.

More significantly, it was after Orphanides Express appeared. And that, as I just discovered with a quick Google search of my blog, was almost exactly two years ago.

My first reaction was, 'What is another supermarket doing in this area?'. I felt quite protective of the new Orphanides Express, which isn't all that big but has almost everything we might need from a supermarket. We got to Metro once a month, but it's remarkably convenient to walk around the corner for milk, or whatever else we might have run out of, in between.

So for some months, I didn't even go into Tesco Express. Then I happened to be at the froutaria, and I needed something that they didn't sell. I don't remember what it was, but I realised it would be quite convenient just to pop across the road. Besides, I was curious to see what it was like.

It's very small. Even by Cyprus supermarket standards. It's more mini-market sized. But it has basic supermarket shelves, with cat food, and baking ingredients, and canned goods, and a freezer section... nothing special. No fruit and vegetables; no bread. But then it's right across the road from the froutaria, and around the corner from the Perseus bakery. It didn't appear to be anything to do with Tesco in the UK. Still, the man on the till spoke fluent English, and was friendly, and the prices seemed reasonable.

I haven't been in there all that often. But a couple of weeks ago I needed some raisins, so I popped in, and was pleased to discover they had some bags of British raisins which were - bizarrely - less expensive than the Cyprus ones. Something is wrong there; grapes grow here, profusely. They only grow in greenhouses in the UK. So the UK bags of raisins were probably first imported to the UK, and then sent here. The shipping costs alone should have made them significantly more expensive. I don't like adding to my 'carbon footprint' more than I have to. But now I wonder if the Cypriot raisins are actually vastly over-priced...

About a week ago, I was in Tesco Express again. I don't remember what I was looking for, but I was very pleased when I spotted some wholegrain bread flour. I make almost all our bread (in our breadmaker), and recently have been unable to find any real bread flour. No strong white flour (which used to be available at Metro), no wholewheat brown flour for bread (which we also found in Metro, more recently, but not in the past few months). I've had to make do with the lighter wholewheat flour which gives a reasonable loaf, but it's not the same.

So when I saw a 1.5kg bag of wholegrain flour that actually said it was intended for bread, I snapped it up. The first loaf I made with it was extremely good. So I went back, and there was only one bag left on the shelves. I bought it, and was assured that they were ordering more. By then all the bags of British raisins had gone, too.

Ordering stock is a bit haphazard here even at the big supermarkets, and we've found more than once that something will go right out of stock right across the island. It happened once with Marmite. It happened for some time with vanilla extract. Currently there seems to be no Bertolli spread. For a small supermarket such as Tesco Express it must be even more difficult trying to keep the shelves stocked with what customers want, when so much has to be imported.

I've been intending to write about this small supermarket for a while, but kept forgetting to take a photo. Today, when I finally remembered, it was a bit annoying that a huge delivery truck was parked right outside!
Posted by Sue at 20:30

It seems to me that it was either brand-new when we arrived or opened just after we arrived, so close to a year, yes. (I do remember seeing signs on it that said something about it being new, but being Cyprus, who knows how long they might leave them hanging up...) And then we heard from someone that they were being sued (or something like that) because they're not actually connected to Tesco, and were going to have to change their name, but obviously, they haven't changed their name yet...