Shopping at Metro in Cyprus

We hadn't done a 'big' shopping trip for a month. Admittedly we did two in December: one where we spent a huge amount of money, early in the month, and one the day before Christmas Eve, when we basically went to collect our turkey and sausagemeat,and ended up buying rather more than intended. We did have to ensure we had food not just for Christmas Day, but for the weekend afterwards, and perhaps even the Monday which was the official Boxing Day holiday... but even so. December was an expensive month, grocery-wise.

For the past four weeks, I've popped into the local froutaria, and the local small supermarket, Orphanides Express when I've needed anything. Plus the occasional foray into a bakery for milk. I go on foot, so am limited to perhaps a couple of carrier bags of shopping. I use a wire carry-basket to collect what I need, and - since I don't want too much to carry home - it's fairly rare that I buy anything other than what I went out to get. Unless there's a very special offer on something which I'm going to need anyway, of course, and if I have room for it.

But once again we were running low on frozen portions of meals, and also cat litter. I could, of course, buy fairly small bags of cat litter from Orphanides Express, but we prefer the large 16kg bags from Metro, which are considerably better value. However, we have to go by car to buy one of those. As for meat: several people over the years have commented that Metro has by far the best meat. It's certainly better value than Orphanides Express, and much easier to find what we want. 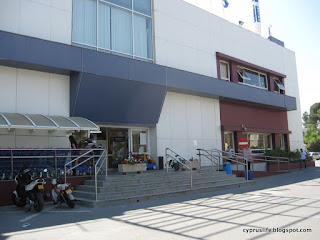 So we decided to go this morning. I jotted down a few other bits and pieces that we needed - to save me a couple of trips locally - but didn't expect to buy a huge amount of shopping.

The trouble with Metro is, it's a nicely organised supermarket, and while I don't like shops in general, it's a lot better than most. if I go to one of the really big supermarkets, I've had enough after about fifteen minutes, so rush to get out as fast as possible. I'm much more inclined to browse at Metro.

Then there are the special offers, temptingly placed on low shelving as you go in. I'm quite good at avoiding bargains that we really don't want or need. But when I saw our favourite Arial washing powder, 4kg size, reduced from 12.99 to 8.99 euros, I picked up a bag. Even though the current one will last us at least another six weeks. Then we saw Heinz tomato ketchup in squeezy bottles, reduced by a euro, making it less expensive than the usual DF brand we buy. I picked up a couple... then a third...even though we didn't actually need any ketchup just yet. But we will, sooner or later.

We had a look upstairs too, just because we find it interesting to see what will be in stock. While we were there, we remembered that I needed some new lightbulbs in my study. Europe, of course, is phasing out all the old style lightbulbs so the only ones now available are the energy-saving ones... in quite small sizes, with 'warm' light, but at about ten times the cost of an old style bulb. I have a ceiling fan in the study with three bulbs underneath that can be used one, two or three at a time... so Richard thought we'd better buy three bulbs, so that they would match, even though only two of them needed replacing. So that was another 15 euros I didn't expect to spend. Then we saw the computer supplies, and I remembered that we needed some blank DVDs for backing up photos... and of course the best value, by far, were in racks of 25. Which should last us a couple of years, at least.

We did buy the meat, and the cat litter, and all the things I'd jotted on my list. I wasn't going to get any fruit and veg, other than - perhaps - some oranges and pears, and maybe some potatoes and onions. But then I saw the special offer places were piled high with bags of fruit or veg at either one euro, or 1.70 euros... in very good condition. Including the oranges and pears that I wanted anyway. So we bought a kilogram bag of broccoli, one of bell peppers, and one of mushrooms, and also a 2kg bag of carrots.

The trolley was much fuller than I had expected. Thankfully the bill was not as huge as the ones in December. Excluding the light bulbs and DVDs, it was about 180 euros, which I suppose isn't too bad for a month's supply of most groceries including all the meat.

When we got home, I decided it would be best to deal with the bulk veggies immediately. I knew if I put them in the fridge, I would forget about them... So I washed them all, peeled the carrots, chopped everything, blanched the broccoli, and have now frozen a large number of two-portion bags of mushrooms, carrot sticks, broccoli and peppers.

So that was my morning.

I was glad I didn't have to go out anywhere, since it started raining as we finished bringing the shopping into the house, and has barely stopped since.
Posted by Sue at 15:22

Sue, if you pop over to my blog, I have given you a little project! :-)

I've never actually heard of Metro! Seems like a big thing in Cyprus :)